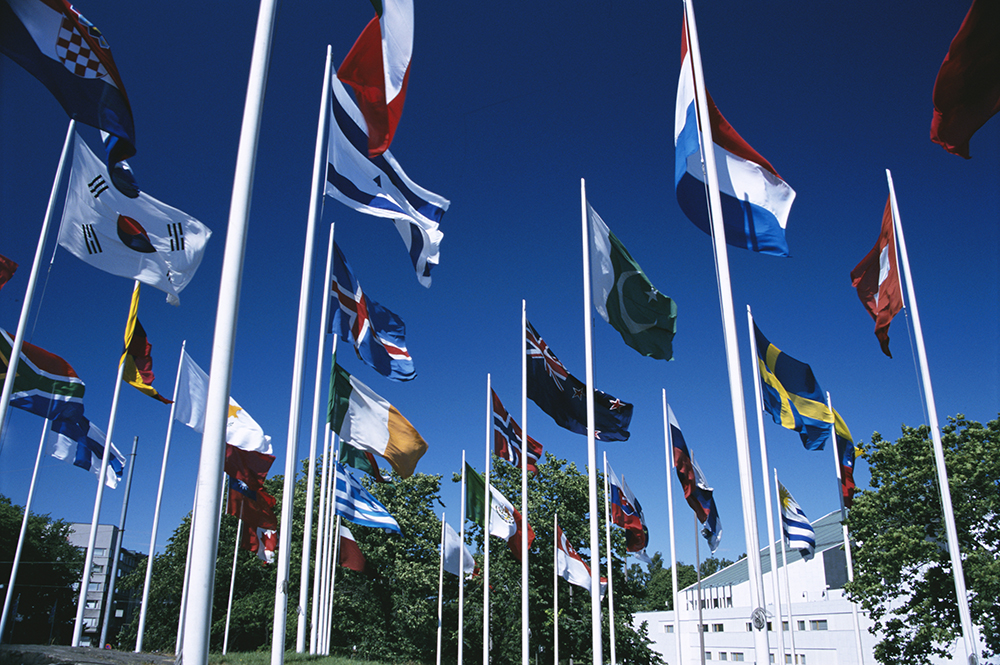 Finlandia Hall, a concert and congress venue, has hosted historically significant political summits in the centre of Helsinki for almost 50 years.

Finland will assume the EU Presidency on 1 July 2019, and planning and preparations have been underway to host events for some time. However, this has not always been the case, and sometimes political summits have been planned and executed to almost impossible timelines.

The news that Presidents Trump and Putin were to hold a summit in Helsinki on the 16-17 July 2018 was received one week prior to the event, in the middle of the Finnish summer holiday season. In only five days, Finlandia Hall was transformed into ‘’the happiest media centre in the world’’, hosting
1500 journalist from around the world and catering for their every need. Finlandia Hall was able to quickly and professionally deliver these requirements through decades of experience and expertise in hosting world class events.

Finlandia Hall provided refreshments to journalists round the clock, drawing inspiration from Finnish traditional cuisine as well as modern culinary innovations. Guests were provided with fully equipped workspaces and multiple breakout areas such as an outside pop-up sauna and a roof terrace with splendid views over Töölönlahti Bay and Park. The arrangements gained universal praise and positive media attention for Finland, Helsinki and the Finlandia Hall.

Conference on Security and Cooperation in Europe, 1975 – the International debut of the newly built Finlandia Hall

The Trump-Putin meeting was not the first time Finlandia Hall has hosted a political summit to a tight schedule. In 1975, in the middle of the cold war, the Conference on Security and Cooperation in Europe (CSCE), was held at the Finlandia Hall. The Finnish President Urho Kekkonen proposed
already in 1969 that Finland should host the Conference, and Finlandia Hall was earmarked as the location, even before building work was completed.

The long-awaited news that Finlandia Hall would host the CSCE arrived on 15 July 1975, only two weeks before the start of the summit. Around 10,000 visitors were expected, and two scheduled medical conferences were quickly found alternative locations.

Preparations were finished on time thanks to the hard work of the Finlandia Hall staff, who worked in 3 shifts to ensure the deadline was met. Skills gained from hosting a conference of European Foreign Ministers back in 1973 proved vital, and the concert hall was rearranged with every third
row of seats removed and replaced with black tables in teak. Booths for translators were built at the back of the stage and a long table was placed centre stage for the symbolic signing of documents. The table was custom designed and made using old school desks, which were fitted with a new,
curved table top.

Privacy was central to the success of the CSCE, and temporary private meeting areas were built in the entrance hall. The Soviet leader Leonid Brežnev, who was suffering from poor health, requested a personal medical room, which was built on the managerial floor and kept top secret throughout the summit.

1350 journalist attended the summit and had use of the newly built congress wing. Finlandia Hall also built an internal TV network, so that events in the main hall could be followed everywhere in the building.

The security measures required for the CSCE were unprecedented in Helsinki. Guards were stationed throughout, including the roof. The comic writer Kari Suomalainen satirised this in a famous drawing called “President Kekkonen’s Fish Trap”, where world leaders were guided into a Finlandia Hall surrounded by metal fences. Everything went to plan; the only incident being a hushed security alert when suspicious men with binoculars were spotted on the roof tops in the nearby suburb of Kallio. The “threat” turned out to be nothing more sinister than curious civil servants straining to get a better look at the foreign dignitaries. Helsinki had established its reputation as a safe location for meetings.

A meeting point and a popular place for visitors

The CSCE founded Finlandia Hall’s reputation as the perfect location for global political events. Finland’s position at border between East and West makes the country a natural choice for meetings on neutral ground. Other global political summits held at Finlandia Hall include a 1990 meeting between George H. W. Bush and Mikhail Gorbachev during the Gulf War, and the 1997 negotiations between Presidents Bill Clinton and Boris Yeltsin over the expansion of NATO.

Finlandia Hall is also famous for its architecture and is often visited by foreign dignitaries. European royals as well as numerous statemen have walked along its corridors. Highly esteemed religious leaders, such as Dalai Lama and Pope John Paul II, have delivered speeches at Finlandia Hall.